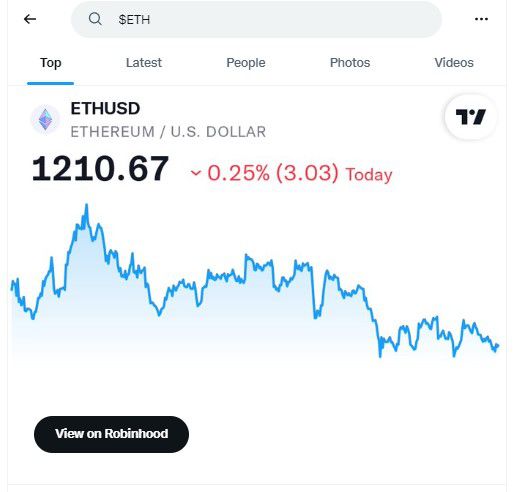 Twitter has added price chart support for major stocks and assets. These include cryptocurrencies such as Bitcoin (BTC) and Ethereum (ETH). Users speculate that Twitter could potentially add more features in the near future.

Twitter Business revealed the $Cashtags feature with index support on December 22nd. The release states that when a major stock, exchange-traded fund (ETF), or cryptocurrency is preceded by the dollar symbol $, the platform will display a pricing chart. with search results.

TradingView is providing the chart data.

Users can click on $BTC and $ETH or search for a crypto asset to unlock the new feature. Clicking on the ‘view on Robinhood’ link takes the user to the wallet provider. By logging into Robinhood, users can connect their wallets and trade cryptocurrencies. However, an official partnership announcement between the brands is yet to be revealed.

That said, the new feature also left netizens wondering why the ‘dogfather’ left out Dogecoin from the initial rollout.

Musk previously confirmed his personal crypto exposure consisted only of bitcoin, ethereum and dogecoin. And ever since they took over Twitter, Dogecoiners have been waiting for the payment integration announcement. But, now that the tech mogul has announced his decision to step down as the head of Twitter, Memecoin has given a negative response in the market.

A $258 billion lawsuit was also filed in September accusing the Tesla CEO of running a pyramid scheme to back DOGE. Despite Musk’s assurance that he will “continue to support Dogecoin”, it is possible that he will hold off until the legal issues are resolved. Additionally, the increased regulation of cryptocurrency influencers by the Securities and Exchange Commission (SEC) must also be taken into account.

Additionally, the industry anticipates that Musk will improve Memecoin as it expands. This could be yet another explanation as to why the billionaire has yet to announce any significant Dogecoin-compatible payment instruments.