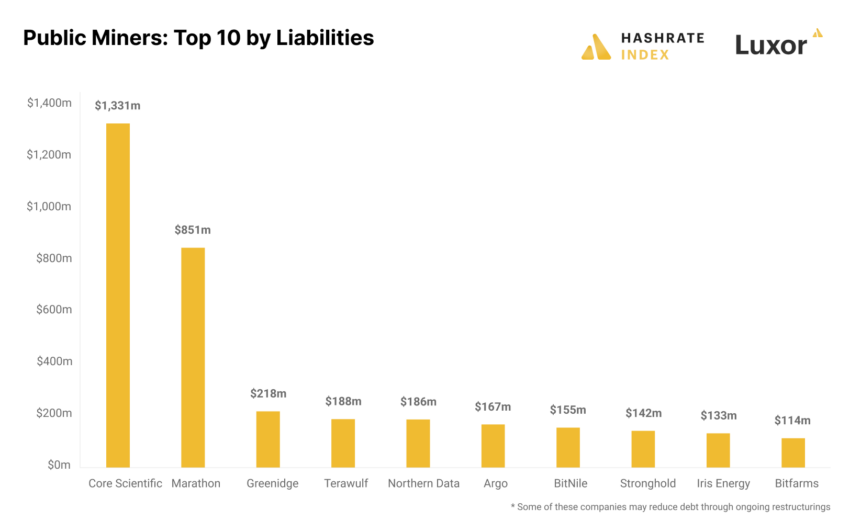 Public bitcoin miners in the US collectively owe more than $4 billion, according to data from Hashrate Index, with Core Scientific, Marathon and GreenRidge Generation being the largest debtors.

According to the data, the largest borrower is Core Scientific, which had liabilities of $1.3 billion as of September 30. The miner recently filed for bankruptcy. Its debt load requires monthly payments of crores to repay its loans.

This meant that even though the company had positive cash flow, it could not service its debt obligations due to the drop in bitcoin prices. Hence, the decision to file for bankruptcy.

Public bitcoin miners were responsible for 15% of BTC mined

Meanwhile, Marathon is the second largest borrower with $851 million in debt. Fortunately, most of its loans are in convertible notes, which don’t require monthly service payments. This kept it in a better position and is not at risk of bankruptcy.

However, Greenridge Generation, the third largest borrower, is not so lucky. It has a debt of $ 218 million and is now on the verge of bankruptcy. It is trying to complete a debt restructuring deal that will reduce its debt, but will also see it transfer most of its hashrate to NYDIG.

Other public miners round out the top ten include TerraWulf, Norther Data, Argo, BitNile, Stronghold, Iris Energy and Bitfarms. They all have a debt of over $100 million.

Most miners have a high debt-to-equity ratio.

Additionally, public miners have debt of $4 billion while equity is $2.2 billion, giving the debt-equity ratio of the entire sector at 1.8, which is relatively high. Although many miners are trying to restructure debt, the future still looks bleak.