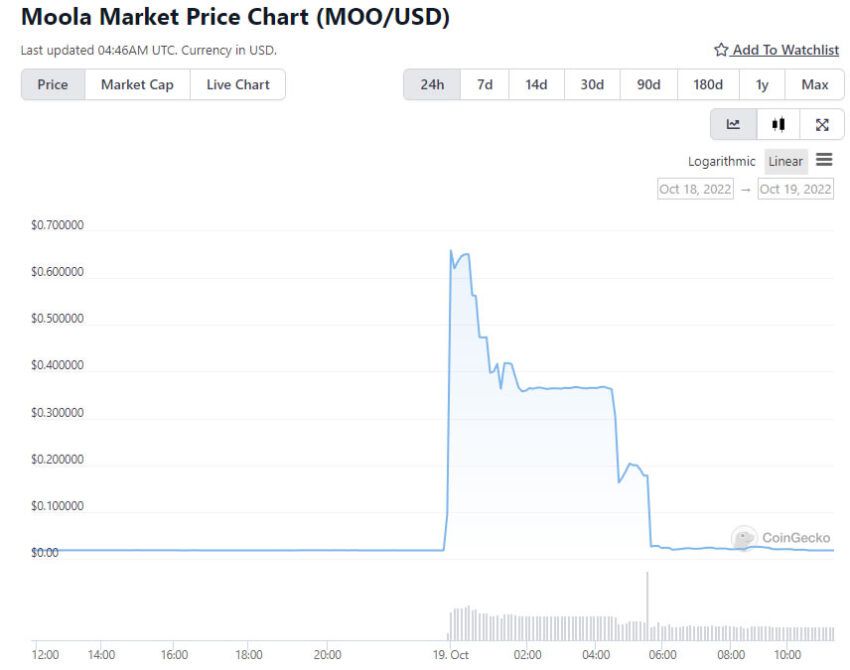 ,Hacktober continues to reinvent itself as one of the worst months on record for crypto and decentralized finance (DeFi) exploitation, with Moola Market joining the list of victims.

On October 19, DeFi liquidity protocol Moolah tweeted that it was investigating an incident and had ceased operations of the platform.

Web3 security firm Hacken noticed the exploit and revealed that $9.1 million was stolen from the Celo blockchain-based platform.

The attacker funded an account with CELO tokens and used them to purchase large amounts of MOO tokens, causing the price to climb due to low liquidity. The attacker borrowed more cells using MOO collateral, repeating this cycle and increasing the price. A huge loan was taken on these inflated prices.

The attacker returned the funds of Moola Market

The self-funded attack was similar to what Mango Markets exploited last week due to a similar economic design flaw in the protocol.

Moola Markets posted that they had contacted law enforcement and were willing to negotiate a reward. Looks like this exploiter was philanthropist and agreed to a conversation like a few hours ago, Moolah tweeted.

“Following today’s incident, 93.1% of funds have been returned to Moola Governance Multi-Sig.”

The attacker also donated a portion of the unrefunded funds to ImpactMarket, a basic market depositor that provides unconditional basic income (UBI) to financially under-banked communities around the world.

Moolah is currently working on governance proposals to address the loophole that resulted in the exploit but it urges a quick fix so that the system can be restarted.

“Additionally, we will examine mechanisms to help restore the remaining 6.9% of collateral to mitigate the impact of this event on the original users,” it concluded.

The actual reward was not disclosed, but judging by the amount returned in the protocol, it is likely to be above $500,000.

The DeFi exploit is the latest in this month-long list, involving Mango Markets, BitKeep, TempleDAO, QANplatform and BNB Chain.