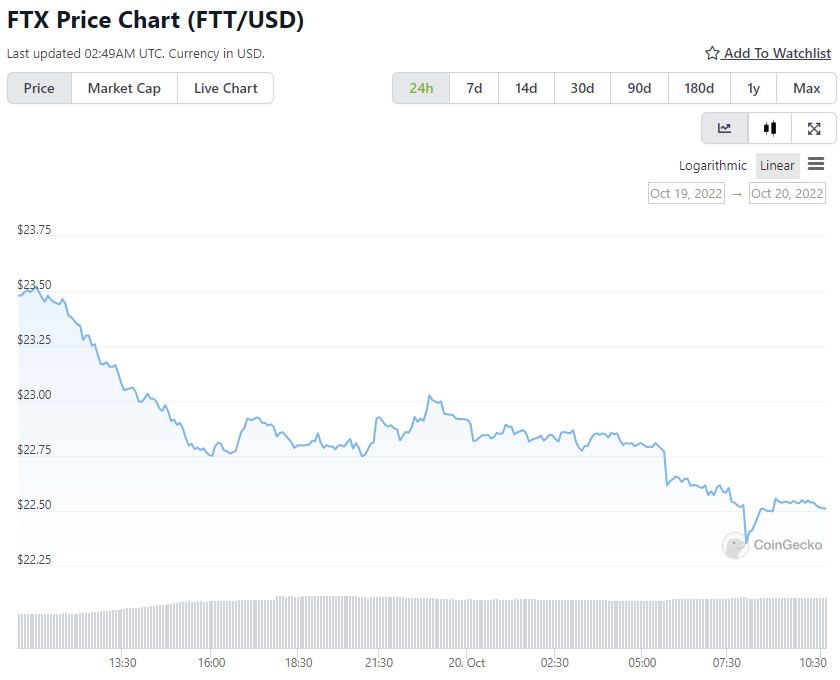 The native token for FTX crypto exchange, FTT, has been a hit in the past 24 hours as new news emerged about its Voyager acquisition ambitions.,

On October 20, Bloomberg reported that a tentative deal between FTX.US and troubled crypto lender Voyager Digital could result in most of the money being returned.

The settlement, which was approved by US Bankruptcy Judge Michael Wills on October 19, cannot be closed until Voyager’s bankruptcy payment plan is approved. However, if this happens, Voyager customers could recover around 72% of the value of their accounts, according to the report.

At the end of September, FTX placed the highest bid for the Voyager assets at $1.42 billion in a two-week auction. Part of the sale will involve moving Voyager customers to an FTX exchange, where they will be paid for their digital assets.

The native token of Sam Bankman-Fried’s FTX exchange has not reacted well to the latest twist in the ongoing saga.

Exchange token losses are on the rise as FTT is down 9% over the past fortnight from $25 to its current price. It has been hit hard, with a 73% drop since its September 2021 all-time high of $84.

An investigation by the Texan securities regulator is adding to the company’s woes. As part of the Voyager bankruptcy case, Texas State Securities Board Enforcement Director Joe Rotunda is also investigating FTX and its crypto billionaire owner.

The regulator claims that the company has offered Texas interest-bearing accounts that it considers securities. Rotunda asked the New York bankruptcy court to stop the sale to FTX to handle Voyager’s case.

There is also an existing threat to regulators classifying exchange tokens such as FTT, BNB and HT as securities when such rules ever go into effect in the US.

Growing regulatory hurdles in the US have not hindered Bankman-Fried’s crypto acquisition spree. According to Crunchbase, his venture capital firm Almeida has made 182 investments. The most recent contribution was a contribution to the crypto trading platform 3Commas Series B funding round. The round raised $37 million in September.

In addition, there are 22 investments made by FTX. The most recent of them was in late August when blockchain gaming firm Limit Break raised $200 million.

Earlier this month, FTX partnered with Visa to launch a crypto debit card in 40 countries.