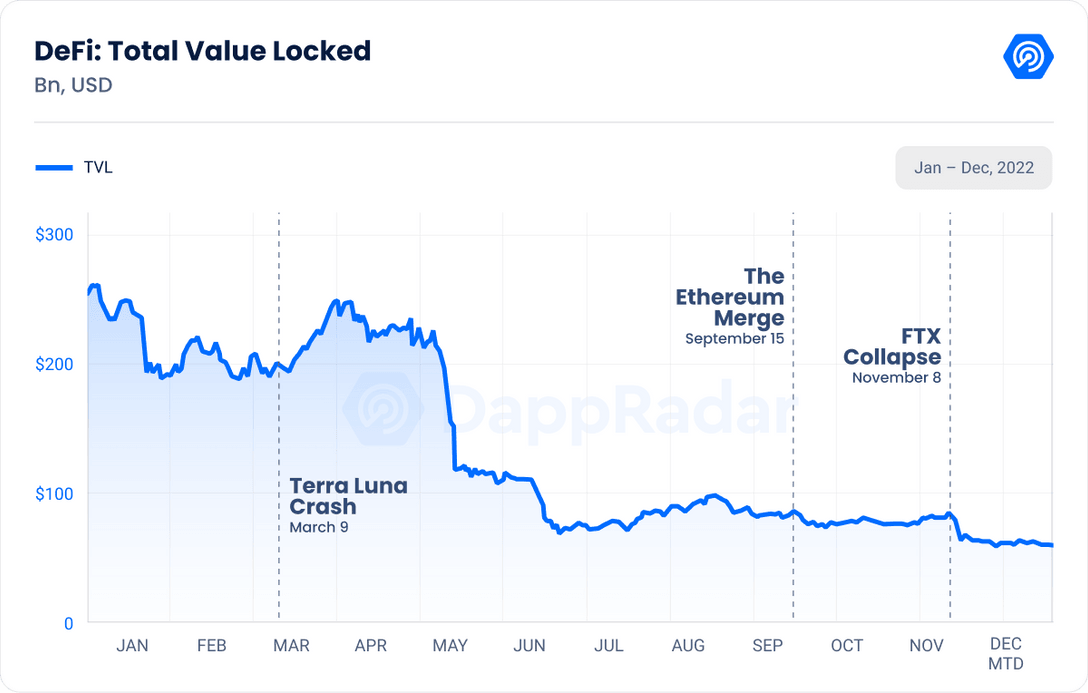 BeInCrypto presents an annual recap of developments in the major cryptocurrency market sectors over the past year.

In contrast to the prosperous DeFi summer of 2021, the past year was marked by collapse and stagnation, though signs of growth remain. At the beginning of the year, there was already a decline in users of decentralized applications. DAP Radar attributed this February’s decline to the outbreak of war in Ukraine.

The industry was hit hard by the collapse of Terra and the subsequent collapse of TerraUSD (UST) and the resulting market crash. One of the most important indicators in DeFi is total value locked, which dropped sharply after the TeraUSD event. Total TVL in DeFi fell from $158 billion in April to $89 billion a month later in the days following the collapse.

Meanwhile, Layer 1 DeFi protocols also experienced TVL declines, with Ethereum down by $32 billion and BNB chain down by $6.5 billion. These constitute a year-on-year decline of 74.56% and 62.5% respectively. On the other hand, layer-2 protocols fared somewhat better, with significant increases for Ethereum-based solutions Optimum and Arbitrum. Displacing other blockchains from dominant positions, many projects actively integrate these networks with users using them to test their products.

Despite the success of these protocols, DeFi ultimately struggled in 2022, with total TVL falling from a high of $211.4 billion in January to $55 billion in December, a loss of 73.97%. But while investment has declined, users seem to have advanced. The number of unique active wallets saw a 50% year-over-year increase, from 1.58 million in 2021 to an average of 2.37 million in 2022.

One of the most important crypto events of the past year was the merge, Ethereum’s transition to a proof-of-stake system. This upgrade not only made Ethereum significantly more frugal, but also brought more prominence to proof-of-stake.

There were several hardforks with merges occurring between 14–15 September that continued to enable proof-of-work. Although the performance of these networks turned out to be worse than expected, the oldest hardfork of Ethereum, Ethereum Classic, flourished. This was likely because miners switched their equipment to the classic network in anticipation of the merger.

However, it was difficult to determine to which other proof-of-work blockchains the surplus capacity of Ethereum miners was distributed. As a result of the merger, many miners may leave mining, sell their equipment, and seek other sources of income. One of the popular options could be Ethereum staking, which has lower returns but is more sustainable long term.

While cryptocurrency prices were down during the past year, non-fungible tokens were performing quite well. According to on-chain metrics, NFT trading volume remained largely stable, increasing only 0.41% year-on-year. However, the number of unique merchants increased by 876% to reach 10.6 million users, while total NFT sales increased by 10.6% to $68.35 million.

The most significant development for NFTs in the past year has been the increased integration by popular consumer brands. Twitter began incorporating NFTs in January, while PayPal announced an integration with MetaMask. Over the spring and summer, Meta took several steps regarding NFT integration. It partnered with Polygon to support this in May, which enabled Instagram to support NFTs. Meta also launched NFT integration through several wallets in August.

While investment in cryptocurrencies may be down this year, the same cannot be said for other blockchain-based developments or Web3. A key metric in determining Web3 progress is the number of downloads of two critically important programming libraries: Ethers.js and Web3.js.

In the third quarter of this year, Web3 developers downloaded the Ethers.js and Web3.js libraries more than 1,536,548 times per week. This constitutes an increase of 178% year-on-year. Since 2018, the number of developers installing one of these libraries on a weekly basis has increased every year. Now, in 2022, that number has increased 10 times from 2018’s high of 145,799 weekly downloads.

Additionally, Web3 metaverse projects have raised $10 billion in 2022, almost three times as much as last year. For example, Nike launched a new Web3 platform called Swoosh in November, which offers polygon-based NFT products. This is a promising sign for the industry, as it will increase the exposure of NFT and Web3 technologies to a larger audience.

Despite being at the bottom of the list, stablecoins ultimately played one of the biggest roles in the growth of crypto in 2022. In addition to the fall in crypto prices, the biggest contributing factor to the major market tribulations of the past year was the collapse and collapse of TerraUSD. stable currency. In addition to losses of up to $40 billion, its collapse also caused successful crypto companies to fail.

But while algorithmic stablecoins such as TerraUSD have lost significant appeal, fiat-based stablecoins continue to prosper. Circle, which issues USD Coin, holds $45 billion in the stablecoin and includes BlackRock and BNY Mellon as its custodians. Paxos’ Binance USD stablecoin and Paxos dollar have about $20 billion in circulation. Despite the increase in market share, Tether still remains large at around 50%.