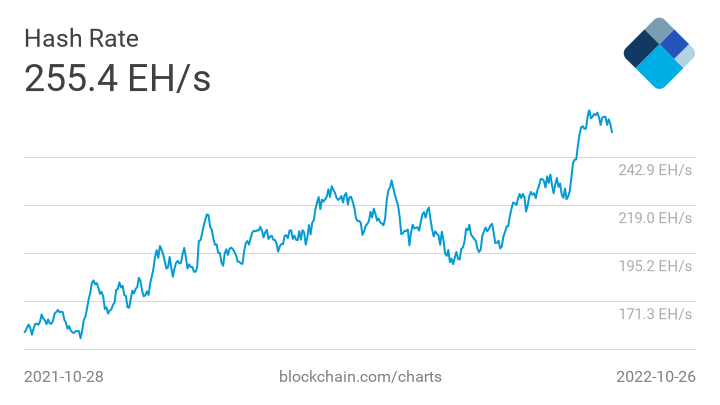 Bitcoin mining giant Core Scientific explained in a filing with the US Securities and Exchange Commission that they are stopping all loan payments.

Core Scientific – a leader in blockchain infrastructure – said in a filing with the SEC that the board has decided the company will not make payments in late October and early November.

This is because the core scientific operational performance and liquidity have been severely affected by the prolonged halving of the bitcoin price, the increase in the cost of electricity, the increase in the global bitcoin network hash rate, and litigation with Celsius Network LLC.

According to data from Glassnode, the hash rate of bitcoin is at an all-time high. An increase in the bitcoin hash rate indicates more competition among miners. The difficulty of mining bitcoin increases, which leads to more power consumption.

Nevertheless, the price of bitcoin is down almost 70% from its all-time high in November, reducing the profitability of miners.

Currently, the production cost floor for bitcoin is around $17,000. This is the cost that miners incur to produce new bitcoins. According to Charles EdwardsA crypto market analyst and founder of Capriole InvestmentsThe cost of production is rising.

Core Scientific was in agreement with bankrupt Celsius Network to provide infrastructure for hosting services. Under the agreement, the machines belong to Celsius, and Celsius benefits from any crypto mining.

The legal trouble with the bankrupt Celsius Network is one of the reasons for the impact on the company’s operating performance and liquidity.

Have something to say about the bankruptcy of Core Scientific or something? Write to us or join the discussion on our Telegram channel. You can share us on Tik Tok, Facebook, or . can also catch Twitter,

Binance Commits to Transparency, Unveils $40B in Stablecoin Reserves
Bitcoin price ‘easily’ due to hit $2M in six years — Larry Lepard
Why is Bitcoin price down today?