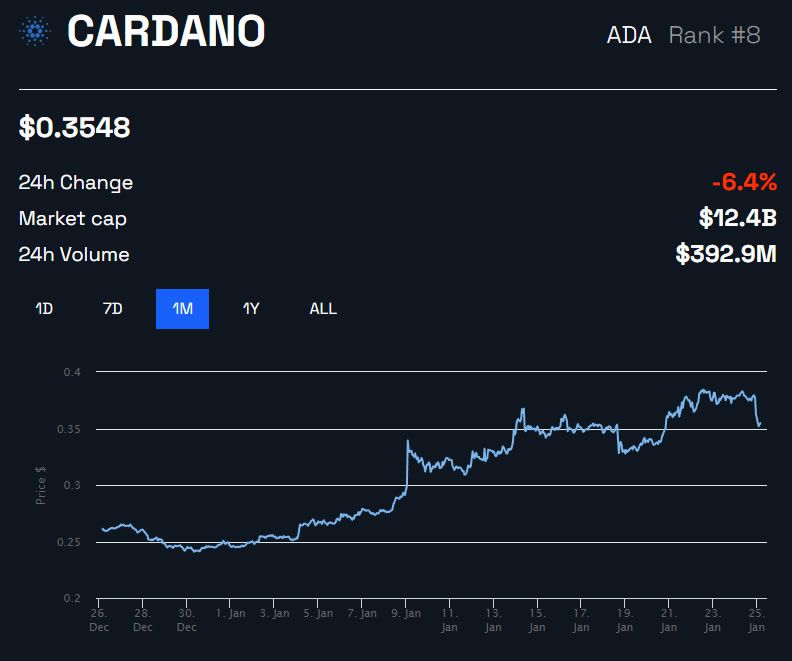 The long-awaited launch date of the ‘Z’ Cardano stablecoin has been announced. ADA price declined today but it could correct further next week.

On January 25, COTI Network announced that the Cardano stablecoin would be launched next week. It didn’t specify a day, but previous blog posts have indicated it will be before the end of January.

The only thing stopping the launch was the chain index syncing process, it said. It was launched a week ago and is set to take 14 days, which suggests that the launch date could be around February 1.

COTI also announced that DJED and its balancer coin SHEN will be listed on the Bitrue exchange.

Additionally, it was informed that a snapshot mechanism and user interface has been developed to track the rewards.

ADA is sent to the stablecoin smart contract in exchange for DJED. A third token called SHEN acts as a balance when the price of ADA fluctuates. Therefore, the stablecoin will be heavily collateralized with ADA.

Last week, Coti explained that Djed is 400% to 800% more collateralized. “This means that its underlying value backing it is 4 to 8 times higher than the total amount of Djed,” it added.

In addition, Minswap, the leading Cardano DEX, announced some pools for the new token.

The launch has been highly anticipated by Cardano fans and ADA holders. However, ADA suffered a setback during the Asian trading session on Wednesday morning.

ADA price is currently in the process of a major downtrend. The coin is down 6.4% on the day to return to the support level.

ADA reached an eleven-week high of $0.384 on January 22, but has retreated from the rest of the crypto market today. It is currently trading at $0.354 after heavy losses in the last six hours.

The pullback could be another buying opportunity before the launch of Djed which could push ADA price still higher.