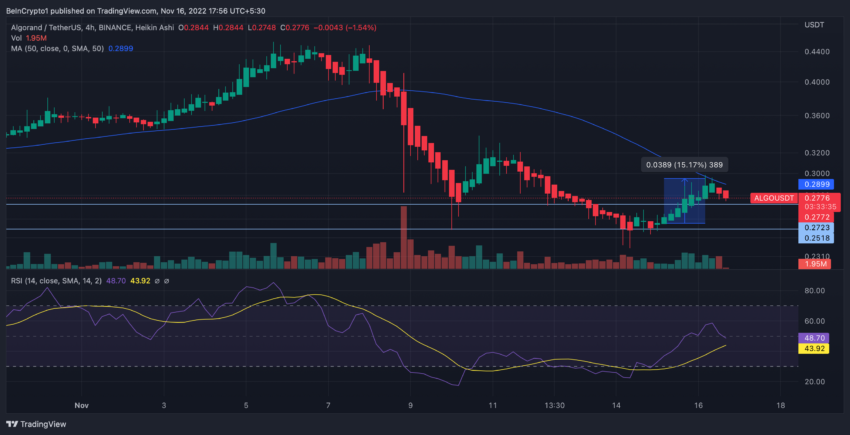 Despite the bearish market conditions, the price of Algo has increased by an astonishing 15% in the last two days.

With the upcoming FIFA World Cup promotion generating positive gains for the coin, Algorand managed to make headlines in the market.

Algorand is one of the few large-cap tokens posting decent short-term gains. Following the collapse of FTX, the prices of most of the top cryptocurrencies are down.

However, Algorand managed to post gains of around 15% over the past two days. According to data from CoinMaketCap, ALGO was among the top five gainers on 16 November.

Not showing the least amount of gains among most of the top altcoins, ALGO price seems to be offering decent short-term returns. It may be tempting for some market participants, but can the gains continue or even be sustained?

Algo price correction, what next?

While ALGO price breaking below the two-year low of $0.25 presented a short-term buy signal, the current situation is not favorable for the bulls. On the four-hour chart, ALGO price formed its first red candle in two days.

The RSI started a retreat, allowing sellers to take over the market. The 50-period moving average acted as a resistance, and after testing the level, the price action started reversing its bullish momentum.

That said, there was still a negative laden sentiment in Algorand despite the hype from the upcoming FIFA World Cup. Notably, Algorand is the official blockchain platform of FIFA that provides a blockchain-enabled wallet solution.

In addition to the negative social sentiment, ALGO saw declining trading volume, which further presented less retail interest. It looks like Algorand could slide back towards the $0.25 price level as soon as the bullish momentum from ALGO price action wears off.

Apart from the October price rally above $0.40, there was no significant increase in active addresses. Another worrying factor was that Messari data suggested that the top 100 addresses held roughly 99% of the ALGO supply, which could spell trouble for the price of ALGO.

Furthermore, Algorand also saw its net worth decline, losing the confidence of institutional investors. Algorand TVL declined by almost 50% for the whole of November.

Overall, if you plan to go long on ALGO be aware that the short term outlook does not look very bright, and a return to $0.25 would not be surprising.

A bullish push, however, could invalidate the bearish forecast and push the price to the next resistance $

Disclaimer: BeInCrypto endeavors to provide accurate and up-to-date information, but shall not be responsible for any missing facts or incorrect information. You comply and understand that you should use any of this information at your own risk. Cryptocurrencies are highly volatile financial assets, so do your research and make your own financial decisions.